For more than a decade, the Gomez family has held a special place in their hearts for Children’s Hospital of Orange County. For years, they have participated in the annual CHOC Walk, which is a particularly special time every year to honor their son, Robby Gomez and support all the kids and families that go to CHOC.

Robby passed away suddenly in 2006 at the age of five. He was an energetic, kind, loving and caring boy that would light up a room with his contagious smile and enthusiasm for life.  Our desire to honor Robby’s legacy and to perpetuate his loving spirit continues to drive our focus of helping children and families in our community. 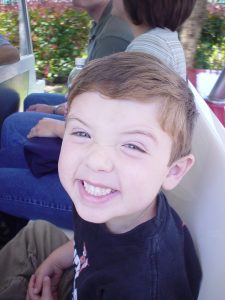 Robert Martin Gomez was born on May 2, 2001. Within minutes a team of respiratory doctors and specialists filled the room. He was rushed off to the NICU and later diagnosed with Laryngomalacia, a condition which affects the epiglottis and restricts the airway. Based on the severity of his condition, he was transported to Children’s Hospital of Orange County (CHOC). Only two days old, Robby received a tracheotomy and endured the first of many surgeries to fix his airway. After spending several weeks at CHOC, we received a quick lesson on how tenuous life can be. We later realized that God was preparing us for a far greater experience, coping with the loss of a child.

On June 26, 2006 our lives were forever changed when Robby passed away in his sleep. He had been sick for a few days and although his condition at birth was not the direct cause of death, it was likely a contributing factor. Robby was a blessing from birth and we are forever thankful to CHOC for the gift they gave us of five wonderful years.

Robby had a smile that was infectious and a special way of tugging at your heart. He showed tremendous courage and strength. He never once complained about all the surgeries, appointments or his noisy breathing. He enjoyed being a kid, which involved t-ball, running around with the neighborhood kids, telling jokes and playing with his friends and little sister. Above all…he loved Batman!

His was very compassionate and wanted to make sure other people were happy.  He taught us how to be better people and enjoy life no matter what you’re up against. His dad always says, “I wish I could be half the person Robby was at 5 years old.”

Our desire to honor Robby’s legacy and to perpetuate the sense of community that lifted us during our darkest time moved us to action. With the help of talented and gracious friends, the Robby Gomez Foundation was created. Our mission is to raise money for CHOC Children’s.  At the same time we strive to celebrate Robby’s passion for life by providing children and families within our community financial support during difficult times.

There is no footprint too small that cannot leave an imprint in this world.

To learn more about Robby and details on the annual CHOC Walk fundraiser, please visit robbybatmangomez.com

Get notified about our next event.